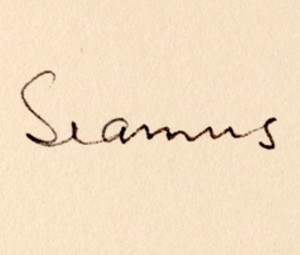 Seamus Heaney, the most celebrated member of a remarkable generation of Irish poets, died on the 30th of August at the age of 74. His full-length books of verse were published in Britain by Faber and Faber, but he also co-operated with artists and printers in a number of smaller-scale private and fine-press productions of his poetry. A small exhibition has been mounted in the Entrance Hall of Cambridge University Library, drawing on the Library’s rich collections of such material, and on correspondence from Heaney forming part of the papers of his fellow poet Anne Stevenson.

Two relatively early illustrated editions included are Bog poems, issued by Ted and Olwyn Hughes’s Rainbow Press in 1975, with illustrations by Barrie Cooke and in a Sangorski and Sutcliffe binding, and Hedge school: sonnets from Glanmore, printed by the Janus Press of Newark, Vermont, for Charles Seluzicki in 1979. Both books were published in the same year as Faber editions—North and Field work respectively—which incorporated their contents and brought them to a wider audience. There are two illustrated broadsheet publications, ‘The earth house’, one of four poems (the others were by Jenny Joseph, Laurie Lee and Lawrence Sail) printed by the Whittington Press with wood-engravings by John O’Connor and published in 1990 for the Friends of the Cheltenham Festival of Literature in a portfolio with the title The four elements; and Mint, the first of three broadsides featuring poems by Heaney published in the early 1990s by the educationist William B. Ewert of Concord, New Hampshire. Ewert was also the publisher of Keeping going, a more substantial production designed by Gino Lee and featuring etchings by Dimitri Hadzi, printed by the Bow & Arrow Press of Cambridge, Massachsetts, in 1993. This was intended as a salute to Robert and Jana Kiely, the longstanding Master and Associate Master of Adams House in Harvard University, to which Heaney was affiliated during his tenure of various posts at Harvard between 1981 and 2006.

From the papers of Anne Stevenson have been selected a corrected typescript of ‘The figures at Kilpeck’, a poem (published, with further amendments and with the title ‘Sheelagh na Gig’, in Station Island, 1984) written after a visit to the church of St Mary and St David at Kilpeck, a village south-west of Hereford, and sent to Stevenson in February 1981; and an autograph notelet of January 1996 replying to Stevenson’s congratulations on the award to Heaney of the Nobel Prize for Literature, in which he admits to a feeling of panic when contemplating his great forebears as Nobel Laureates, Yeats and Beckett, but takes comfort in the ‘known living’, Joseph Brodsky, Derek Walcott and Nadine Gordimer.

The display will be on show until Monday 30 September. Entrance Hall displays are open to the general public during the Library’s normal opening hours.

View all posts by John Wells