Exhibition of Terence Rattigan Archive at the British Library 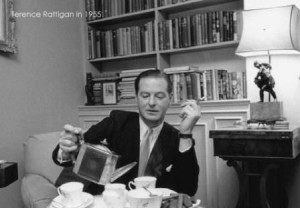 Forgotten from the eyes of the public during the last decades, the playwright Sir Terence Rattigan (1911 – 1977) is in favour in 2011, the year of the centenary of his birth. An extremely successful playwright between the thirties and the sixties and author of 25 full length stage plays, he was one of the most popular twentieth-century dramatists. As the London stage presents two successful revivals of his plays – Flare Path at the Haymarket Theatre and Cause Célèbre at the Old Vic – his work attracts more and more public attention. The British Library is therefore participating in these centenary celebrations by curating an exhibition of his work.

The 300 volumes of Rattigan’s archive, purchased from the Rattigan Trustees in 1990, are in the possession of the British Library. It mainly consists of papers and correspondence of and relating to Sir Terence and to his plays written for the stage, for the cinema, for radio and for television. In the context of the 2011 centenary, the exhibition devoted to him, Nothing Is Ever As It Seems, will take place in the British Library’s Treasures Gallery from the 4th of April to sometime in June. It will display four cases of items derived from his archive, including letters, photographs and original manuscript drafts of plays. Nothing Is Ever As It Seems explores among other things the beginning of Rattigan’s career as a playwright, as well as its height and his loss of favour with both critics and audience in the sixties.

His second big success, Flare Path, is in particular well represented. Written in 1942 during the Second World War, it was directly inspired by Rattigan’s experience in the Royal Air Force. On display are his training notebooks, his flying log book (saved by Rattigan himself), as well as a photograph of the playwright in his RAF uniform and the typewritten script of Next to Kin, original title of Flare Path. Sent to the Lord Chamberlain’s office to obtain the licence to perform, this manuscript is the final version intended by Rattigan, before it was actually staged by Anthony Asquith in August 1942.

Next to this juvenile play is displayed the autograph script of his last work, Cause Célèbre. First written as a radio play, it was then produced as a stage version with the help of the director Robin Midgley. Recently acquired by the British Library thanks to a donation in August 2010 , the exhibited letter from Rattigan to Midgley discusses amendments to the play and shows Rattigan’s dedication to his work as a playwright a few months before his death and his will to see his last play staged, in July 1977.