Macmillan Archive looks back on 150 years of The Golden Treasury 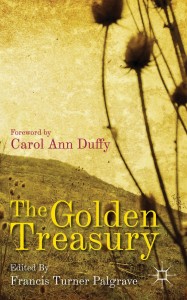 Francis Turner Palgrave’s The Golden Treasury was originally published in 1861 and has been the standard anthology of poetry for over 100 years. The Golden Treasury series helped to popularise Wordsworth and other romantic poets and is a set text for students of English Literature across the world. The volume has been in print ever since the first edition and a facsimile version with a new foreword by Carol Ann Duffy is being published today to celebrate this anniversary.

A full account of the history of The Golden Treasury, featuring images from the Macmillan Archive, has been compiled by Macmillan archivist Alysoun Sanders and can be read on the Palgrave Macmillan website. The archival sources document Palgrave’s original resolve to infect the whole nation with a love of poetry, Tennyson’s involvement in the initial selection process and the subsequent addition of new poets as the volume’s popularity and influence grew.

The Macmillan Archive itself is divided between the British Library and the University of Reading. Amongst the British Library holdings are the original manuscript of The Golden Treasury and correspondence between Palgrave and Alexander Macmillan. Generally speaking, correspondence relating to Macmillan’s most prominent authors is to be found at the BL, but Reading nevertheless retains letters from Hilaire Belloc, Rudyard Kipling and W.B. Yeats amongst other well-known writers.